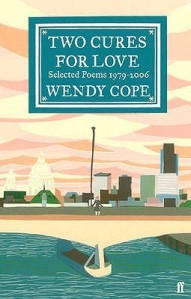 I haven’t posted anything recently about Poetry Under the Paintings, and since I just sent out the announcement for the Valentine’s edition to my local Facebook poets and poetry lovers, I thought I’d pass along to you the video I included for them. It’s one that I recorded on YouTube three years ago, but had never uploaded to the blog. In fact I had accidentally kept it marked private until after Valentine’s day that year, so I’m not sure how long it sulked alone in obscurity before I marked it public and it started getting views.

I made a few tweaks, cut out an intro that was too long, and now include it for you below, along with two other poems by Wendy Cope. She’s something of a poetic sprite at spoofing other poets, and their poems, and she brings a welcoming and comfortable playfulness to traditional forms. This one makes reference to the bargaining of hearts in Sir Philip Sydney‘s sonnet “Song From Arcadia.” You’ll recognize it from your 11th grade English lit class, I promise you. Wendy’s parody is written in the voice of the fictitious poet Jason Strugnell who writes for her in her collection Making Cocoa for Kingsley Amis.

And since the piece is a love poem, or perhaps an anti-love poem (which for some is even more appropriate for Valentines Day), I thought we should include a few more from this poet. The second video is from the king of online poetry readers, Tom O’Bedlam, of YouTube’s SpokeVerse channel. You’ll probably recognize his deep, distinctive voice. He’s got a brilliant knack for picking the right poems to record, and he’s been damned kind and helpful to me. His channel is a wealth of audio for poetry buffs, educators and lovers of the spoken word. If you haven’t already, please spend some time enjoying his work. You’ll thank me.

The third and final video selection is of Wendy Cope herself reading an approachable, but much more serious poem entitled “Spared,” from her Two Cures for Love collection. This time I have included the WorldCat.org link so that you can look for the book in your local library, or failing to find it, encourage them to pick up a copy for their shelves.

The Poetry Under the Paintings crowd usually meets at Faustina’s Gallery in Lewisburg, Pennsylvania on the second Thursday of each month at 7:00 pm. If you’re in central Pennsylvania, call the art gallery for more information. They are a lovely, welcoming bunch.

My true-love hath my heart and I have his,
By just exchange one for the other given:
I hold his dear, and mine he cannot miss;
There never was a bargain better driven.
His heart in me keeps me and him in one;
My heart in him his thoughts and senses guides:
He loves my heart, for once it was his own;
I cherish his because in me it bides.
His heart his wound received from my sight;
My heart was wounded with his wounded heart;
For as from me on him his hurt did light,
So still, methought, in me his hurt did smart:
Both equal hurt, in this change sought our bliss,
My true love hath my heart and I have his.