It’s Mother’s Day, and a young poet friend has been three days without his mother. She died suddenly and unexpectedly in her sleep. What can one say, except, “Friend, you are not alone?” I’m thankful that he has many friends and family to look out for him. Eventually, it is my hope, he will feel the truth that she is always with him, a part of him, not just his memory, but his very person.

It’s been thirty years since my own mother died on “Good Friday.” The date was April 17th, and while I know that, to me, the cloud is always over that religious weekend. I think it took until this year for me to look out the window and actually take a little joy in Easter, and not to feel any resentment.

I saw a young rabbit in the yard, among the fresh Dandelions and Violets (weeds, people call them–I don’t understand), a Robin in the grass nearby, digging for spring worms.  And what I already knew somehow sorted itself out in my brain so very clearly, that the old resurrection story I grew up with was, in its proper context, symbolic, metaphorical–for this, but also for our lives in general. So much pain has been caused by taking only the literal view, or taking the symbolism only as far as the doctrine of Christians being “born again.”

I think Emerson would agree that somewhere along the way, and probably very early on, the original intention of an inspiring parable of rebirth and renewal for the earth and for our own spirits, was subverted into something that focused only on the death of one man and how we now must build our entire lives around him. But perhaps the original was a metaphor, a super-hero story (which is always a story about the untapped power within ourselves), symbolic of what we might become if we were to follow nature’s cue and let the old seasons of depression, cold and darkness pass away and see our world anew again.

The old dead world of winter, or what appears to be dead, having survived the cold, dark season, gives way to new life, and despair and darkness are replaced by hope and light, freezing winds and snow replaced by life-giving rain and warmth. You can take that story literally if you wish, but to insist that others do is to ignore the glorious implications and applications that are possible. It’s easier to hold on to old fables and mythologies than it is to imagine and to question and to admit that there is so much we do not know.

Why can’t that admission be exciting and inspiring? Why must it frighten people so? For me, it is enough that we are exploring, asking questions and learning. How thrilling it is to know that there is so much more to discover and learn? I suppose there was security in thinking that there was a plan all laid out by someone else, someone bigger. That thought was maybe less scary than the prospect of setting off on my own. But to think of this world as something that only can be “saved” by someone “up there” seems defeatist. And isn’t it missing the import and symbolism of the part of the story where that deity became a human?

Sorry, this started out as a Mother’s Day reflection and wandered into a musing on Emerson’s Divinity School address. But, for me, that’s where the story had to go if I am honest. It says a lot about how I’ve coped with and grown to understand Easter, the season of spring, the teachings from my childhood, the applications to reality as an adult, and of course, my own mother’s death.

“The smallest sprout shows there is really no death;
And if ever there was, it led forward life, and does not wait at the end to arrest it,
And ceas’d the moment life appear’d.

All goes onward and outward—nothing collapses;
And to die is different from what any one supposed, and luckier.”

That death is “luckier” line sounds frightening and rather dark. People don’t seem to talk much about it unless it’s in some madman’s words from a post-911 novel like Michael Cunningham’s Specimen Days, where it becomes a mantra for the mindless devotion of a suicide terrorist.

But I submit to you that Uncle Walt meant nothing of the kind, and that to look at it that way is to remain stuck within the Judeo-Christian framework that he was seeking to broaden out from. Whitman was not suicidal. The very act of breathing was an inspiration to him. He embraced being alive, lying down in the grass, riding through town, bathing in a river “undisguised and naked.”

“My respiration and inspiration…the beating of my heart…the passing of blood and air through my lungs, the sniff of green leaves and dry leaves and of the short and dark colored sea-rocks and of hay in the barn…the delight alone or in the rush of the streets, or along the fields and hillsides, the feeling of health…the full moon trill…the song of me rising from bed and meeting the sun.”
―Song of Myself

He merely meant that death is lucky in the sense that to be alive at all is lucky, something to delight in; that death is part of the process of life and that life goes on. We might be happier if we were grateful for being part of the show, rather than fearing that we may be a displeasure to the playwright. 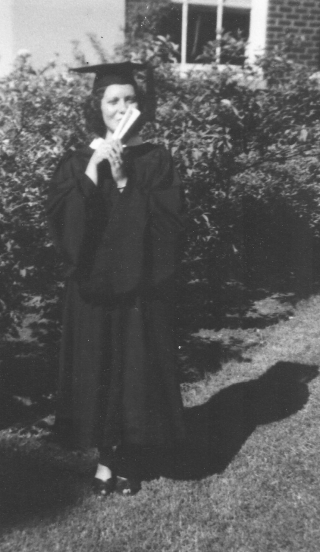 I’d like to think that Mom would be okay with the outlook I have now. That she would not mourn my having gradually grown up into an unbeliever. That she would, if not agree, at least be able to sit and chat with me about our thoughts the way we used to when I was 17, in the living room late at night. Perhaps I just prefer to remember her this way, but I recall her listening respectfully and with curiosity, even when the look on her face held a touch of incredulity at my opinion of the day. Still, she listened, not in order to interject her next point but to really understand what I was thinking, and why.

Mom, the way I remember it, you taught me to believe in myself, to think for myself. I’d like to think you “done good.” I’d like to think you’d be proud of your youngest, and his three boys, your grandsons.  In any case, you are always part of me, and I need not be religious or a mystic to feel that you somehow, across space and time (because you had faith in me from the beginning) understand and smile when I say, “Thank you.”

And as for my young poet friend, from the way he speaks of her, it sounds like he had this kind of relationship with his mother too. I hope that he finds peace and comfort in the knowledge that she is, quite literally still with him, in his thoughts and in his bones.