Just a little journal-ing here today, old-school, Journalspace-style, and very sparsely edited. Does anyone remember Journalspace? That’s where I had my blog before it was mainstream to really call them blogs. After MySpace, before Facebook, back in the early part of this (still rather young) century many of less trendy net writers were keeping “online journals” rather than web logs, or blogs. Sadly they lost a ton of data one day and many of us had to rescue our posts from google’s cache.

There was a certain level of community that was attractive about Journalspace, because we were not simply keeping web diaries, we were connecting with other people of like interests, via keywords, now called tags and sometimes served with hash (I’ve tried to develop a taste for it, but to be frank, I prefer bacon).  If memory serves me right, as it sometimes does, that’s where I cyber-met Bryan Borland, who has since gone on to publish a couple of books of poetry and become founding editor of Sibling Rivalry Press and the literary journal Assaracus.

Sadly there are very few people I’ve managed to follow since those days. But there is a similar community of folks on WordPress, as well as a larger audience of non-bloggers who find my spot here because WordPress has a longer reach, and much greater success promoting our posts to the the rest of the world, rather than just a little circle of journal-ing writers. There is a metaphor in this about modern poetry, but I’ll let it go for now.

The Timely Curse, or Hashtag Hell

So you noticed the title. Yes, Father’s day was more than a week and a half ago. Too late to get on the “trending” wagon. Way past time to hitch my stats to a hashtag star. Some web guru out there is thinking, if he wanted readers for his Father’s Day post he should have posted no later than Father’s Day. True. But this isn’t a Father’s Day post. As the title says, it’s the Post Father’s Day Post. And besides, you know what? I don’t care about the date or the day. In fact I’m bloody sick of all of this SEO talk that is all about timeliness and little about thoughtfulness.

You see, I was too happy enjoying my Father’s Day (which was celebrated more on Monday than Sunday anyway), much too happy to even pause the festivities to write about it at the time. But if now I want to share with you some thoughts that I have pondered on after the fact, the current web wisdom says that it’s too late.

I noticed this regarding internet activity on the recent death of Maya Angelou. I posted a reading and a few words several days after the fact, and by then the only twitter buzz, the only Facebook shares, the only mention at all of her was in regards to her memorial service on or about the day of the ceremony. It’s not the sort of thing you can know about ahead of time, but you damn well better post your RIP message as soon as you get the news if you want traffic to your blog, right?

I’ve seen it again more recently with the appointment of Charles Wright as the new US Poet Laureate, something I am planning to post about after I have read more of his work, and become more familiar with the man. In other words, after (and if) I actually have something remotely unique and hopefully interesting to say about it. Meanwhile I confess I have re-tweeted the NPR article and shared a poem or two on PalPage, but why should I feel an urgent need to write about it? Am I a news journalist, or a blogger poet?

Why have we got caught up in the insanity, the rush to post anything about everything as soon as we know about it?  Why are we letting ourselves get pulled by the tide of other people’s information streams? Ratings? Bingo. I think it started long before the days of CNN’s 24 hour news coverage, but that’s as good a place to start as any. Back then we loved to listen and watch as they speculated on what was happening, rather than reported it after the facts were known. Why? Because everyone wants to be the first. Everyone wants to have the traffic.

But have we lost sight of the importance of quality? Have we lost the ability to reflect? I have found myself caught up in this game myself, posting about poet’s birthdays and such, and I don’t mean that I won’t do so in the future, but hopefully It’ll be a bit more planned out, a result of pre-cogitation, rather than regurgitation. I have no desire to become a “curator of content.”

Boy, I can go on, can’t I? But like I said at the beginning, this is old-school web log stuff, and I’m not forcing you to read it. Not timely, not tweet-able, but hey, sometimes isn’t it refreshing to dwell on an event AFTER the calendar date?

So first, the Monday before Father’s Day. Well, I cannot quite fathom how this happened yet. I’m told this is what is supposed to occur. We care for, nurture, train, discipline and love the hell out of our kids, and one day they show signs of having grown up. And one startling day they stand before you in graduation gowns, smiling for the camera while you wonder where the devil 18 years went.

I’m proud, immensely proud, and as proud as I have ever been, his two brothers having preceded him in ceremonies just like this. He had a rough year health-wise, but look at the brilliant smile on that brilliant boy’s face. I’m honored to have been a part of his growing up. Humbled to have been called Father by all three of these incredible young men. Yeah, this was a great prelude to Father’s Day. And where did he choose to go out to dinner? Ha! Our favorite old pizza shop of course. Priceless (as apposed to merely cheap, and easy on Dad’s wallet).

The weekend of Father’s Day I worked at both the library and that other job. More than 38 hours in three days, and so was wiped out. After seeing the “Happy Father’s Day” message on PalPage (I love calling it that, and I confess it’s stolen shamelessly from Days of Our Lives), I called first my sons and then my own dad and made arrangements for my Monday off. Then I promptly took a much needed nap that lasted for four hours.

I woke up, snacked and finally watched the first episode of Sherlock. Looks promising. Then back to bed, for a Monday morning lie-in that I think was deserved. An early dinner/late lunch was had with my favorite three young men at a ma-and pop country diner at the meeting of two old major roads and two railways, now the home of a big Sheetz across the street, the view from our table-side window. Word to the wise: if you must go out to eat for Father’s Day don’t actually do so on father’s day.

The dinning room at Winngate was empty except for our crew and we were amused by how many state troopers seemed to enjoy frequenting the Sheetz across the road. They must have good coffee and donuts. We felt safe, and dang the turkey sub and vegetable soup was amazing!

Then a visit with my dad not far from there. Bluebirds, hawks, tales of deer being chased by the cows in the pasture. And also the realization that now at 83 there was no longer even a hint of awkwardness in my conversations with Dad. He no longer feels the need to instruct me on being a good father, on getting through life. We simply enjoy the time and conversation, the questions on what flowers the butterflies enjoy the most. Peace, and relaxation. That’s what being with him is like, finally after all these years. 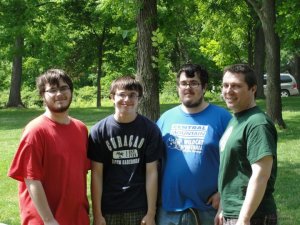 After that we went to see How to Train Your Dragon II, in the same old, but restored Art Deco-styled theater I used to go to when I was a kid. The movie was excellent, and better than the first. But I teased Jonathan (he chose the movie) that it was not exactly a Father’s Day film. And that’s all the spoiler you’ll get from me.

I hope you had a happy dad’s day. If you have kids, I hope you drank up the experience. I hope you called your dad, or at least had a good memory or two. And I trust you had time and leisure to reflect on it long after the fact. I’d love to hear about it in the comments.

Next up, some more small press publishing news! Thanks for lollygagging around my memories with me. I appreciate it.