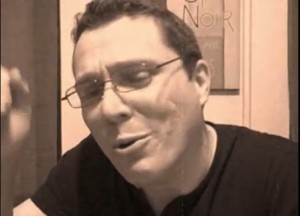 Since I am too impatient for (or intolerant of) Throw-back Thursday, and since Flash-back Friday has become passé, I will attempt, while back-gazing, to get ahead of what’s fashionable, and call this post a “Way-back Wednesday.”  But here, alas, I see Twitter has already hash-tagged this. So be it.

From the Way-back Machine, here are two videos from my past. The first was recorded as a response video (back when YouTube allowed that activity) to a Billy Collins reading by the great SpokenVerse, who goes by the nome-de-net of Tom O’Bedlam. I was stunned and so pleased when he actually wrote back to me. What a voice that man has! He still corresponds with me from time to time, and I consider it a great honor.

The second is from 2009 and the very beginning of my YouTube channel under the screen name SonofWalt, and what has led to over a hundred and fifty poetry readings on YouTube, and later another sixty-plus tracks on SoundCloud. My son Micah decided to start filming while I read a different Billy Collins poem (the first of his I had ever read I think–when it appeared in Poetry Magazine) to my friend Miranda.