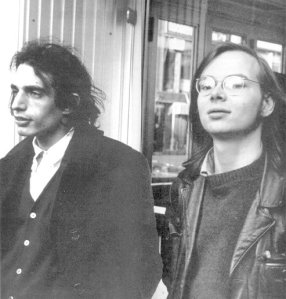 Hello, Friends. There’s a lot I want to catch up on as I’ve been promoting the release of my first chapbook so much lately.  But I want to pause and talk about a couple of artists we’ve lost in the past week, including poet John Ashbery (more on him in the next post) and today’s Saturday Song Featured artist, Walter Becker, half of the band known as Steely Dan.

I honestly can’t say I’ve followed Becker and the band’s co-founder Donald Fagen in recent years, but they’d still been playing up until Becker’s recent illness. But then, you don’t follow the sun, right? It’s just always there. It comes up again every day, even if it’s cloudy for a while. That’s how it is with Steely Dan; their songs are just always there, like the blue in blue jeans.

What I remember is just how intricate their music has been to the soundtrack of my childhood. Seemingly easy, but smart jazz-rock in the background or on any car radio tuned to a classic rock station. The songs that are part of me most include the earnestness of “Rikki, Don’t Lose That Number,” the one-word hook of “Peg,” the fun, but arguably inappropriate “Cousin Dupree” and “Hey, 19. ” But probably my two favorites are in the videos below.

Here’s a link to Walter Becker’s obituary in the Rolling Stone, and be sure to follow on to Fagen’s tribute to his music partner of more than 45 years.

“They got a name for the winners in the world.
I wanna name when I lose.”

While listening tonight to Steely Dan’s “Deacon Blues,” I realized we were a full minute and a half in before the chorus, and more than two minutes in before the hook. Is the bulk of modern pop just not that intelligent anymore, or have our attention spans really shrunk so much that we can’t enjoy a long, poetic build up like this on our top forty charts today? Or is my nostalgia just skewing my perception? Here’s “Deacon Blues” from their album of 40 years ago, Aja (pronounced Asia),

And now, my favorite. I recently watched a clip of Donnie and Marie Osmond totally butchering this song on their old variety show, dancing a two-step, smiling ear-to-ear as if there was no twisted-mouth, sarcastic humor in the words, totally missing the mood of the music.

“You’ve been telling me you were a genius since you were 17.
In all the time I’ve known you I still don’t know what you mean.
The weekends at the college didn’t turn out like you planned.
The things that pass for knowledge, I can’t understand.”

And maybe the fact that I am coming up on a big birthday this weekend is why I am feeling so nostalgic for this song.  From their 1972 album Can’t Buy a Thrill, Steely Dan’s “Are you Reelin’ in the Years.”

Thank you, Walter, for contributing to my world with your songs and your wicked humor, You’ll be missed.